We often  wonder why  human beings refuse to  comprehend the significance of  unprecedented events.   Is it not logical to observe, interpret, apply logic, and finally, act accordingly?
Unprecedented events in 2018  such as record temperatures and perhaps  the largest wildfires in history occurred.   Destruction of homes, property, infrastructure,  habitat for animals. A record fire season in western Canada (again) this time in B.C.,   consumed thousands upon thousands of hectares of pristine forest. Thousands of  hectares in single blazes as major fires merged to become horrific beasts from hell.  Heat, smoke, fear, lives lost, major evacuations.  Reminiscent of  Fort MacMurray  a horrific  2016 blaze  that burned subdivisions to the foundations, scorched parts of that city and consumed 5,895 square kilometers of forest     (589,552 hectares or 1, 456,815 acres). The Fort Mac fire took 15 months to extinguish. Wasn’t that fire convincing enough for  you?

Further east,  (2018) the Parry Sound wildfire in Ontario threatened to cut off Hwy 17,  Canada’s major east-west traffic route.   California had unbelievable heat, major wildfires. with record destruction.   Here’s a hint; do excessively-prolonged periods of super-hot, dry weather with no rainfall over vast areas of the continent not suggest change?

Fires were not Enough.

Fires were not enough. Major rainstorms and floods occurred in Toronto.   Imagine that.  And unprecedented  tornadoes —including  Ottawa of all places. How destructive,  almost  predictable, with weather patterns warming and unstable.  There were no fatalities, but some might suggest ominous warnings for rotten politicians and selfish  “weather deniers” alike. Let us not go there.  Should we generously suggest  pretending such events are only the result of the capricious, playful mind of Mother Nature? Perhaps not.

More out-of-control wildfires. Heat. In Greece. Spain. Even north of the Arctic circle.   A once-in-a-century drought in Australia.  Record, unbelievably hot scorching  temperatures.  Only 40C, you say?  50C ? How hot can that  be? Very. Without rainfall, without relief,   heat can be fatal to people and animals alike.  So…  100+ days without any rain, not a drop?  Australians necessarily cull  sheep and cattle herds. No rain, no water, no feed, little hope, mate, so dig in.  On massive sheep ranches, survival of prize  breeding stock is essential.   Ensuring recovery, when and if the rains come. The Australian way of surviving difficulty, mate…

Now for the hurricane season.  Florence , a deadly  hurricane became a massive tropical storm, sweeping up the eastern seaboard of the USA. Wreaking havoc, flooding, massive  destruction from deadly winds and other nasty hurricane stuff. Awesome to watch. On television.  In real life, not so much.  Unprecedented, massive evacuations of millions.  Dank, dirty, contaminated water already metres deep from the storm surge,   aggravated by record rainfall  . As much as  1.27 metres ( 50 inches) of rain were dumped upon some parts of the Carolinas  —pouring  into rivers already washing away homes , streets, highways and lives, flooding reaching  record levels, water trying to return to the sea. 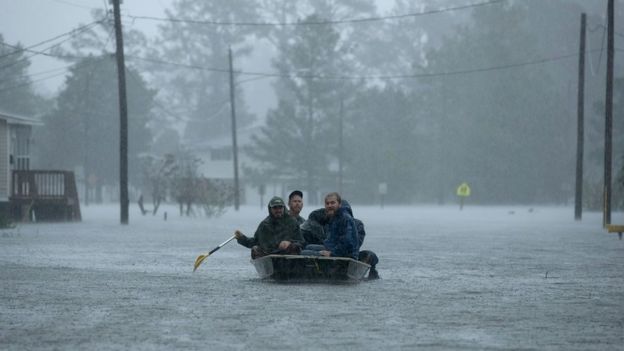 Harrowing rescues by exhausted rescuers. Deaths. Forty-four fatalities  at the latest count.  And the tally may  not finished yet.  Why?  Havoc  and death can remain undiscovered in vast areas of massive flooding. Repairs to homes and businesses are calculated in the billions as waters recede.  Slowly. Repairs to some  flooded homes and infrastructure may be possible; for others, loss is catastrophic, total.  Americans will rebuild. For next time. Repeat.

Do we change our minds when confronted with fact?  No. How about the ‘fact’ of Florence?  A hurricane that was approximately 600 km. across in size. Unbelievable.

Or how about the simultaneous and gigantic  typhoon  Mangkhut  , much larger than Florence, closer to 900 km. across?   Much bigger ‘facts’ battering the Philippines on the other side of the world?  Or is that event, like other foreign disasters,  just  ‘out of sight, out of mind?’  Not for millions of people ill-equipped to deal with the aftermath of flooding, landslides, loss of homes and devastating winds. 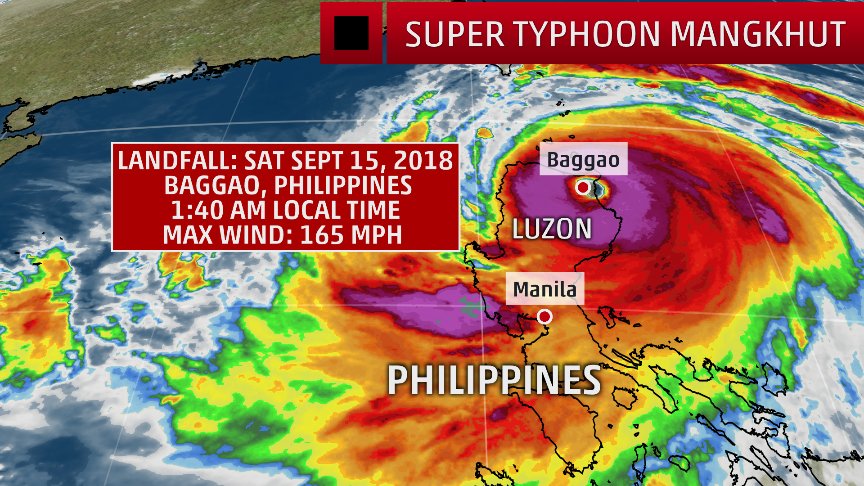 Super Typhoon Mangkhut batters the Philippines on the other side of the globe…Sept 15, 2018

If not, it seems we soon will.  Weather patterns appear to be surreptitiously  creeping northward.  Ask the people of  Ottawa and the surrounding area to Gatineau, Quebec. Ask how they feel about surveying  the shattered remains of their lives,  homes, possessions,  cars, trees, parks, streets and infrastructure. No  fewer than SIX tornadoes struck.  Perhaps shocked residents should be asking themselves if the annual, almost predictable  destruction of  terrifying tornado alley is  moving in from the United States of America. Unwanted imports?  Imagine that possibility.

*Batten the hatches.  Earthquakes and Tsunamis…right on time… Indonesia was recently  hit by another earthquake, 7.4 magnitude…death tolls in the many hundreds,  and counting…

Connect the dots…will we ever take responsibility for our part in global warming and natural disasters?